We recently sat down with Bethany Christo of FEAST Magazine to discuss some of the restaurant projects we have worked on in St. Louis, Missouri. 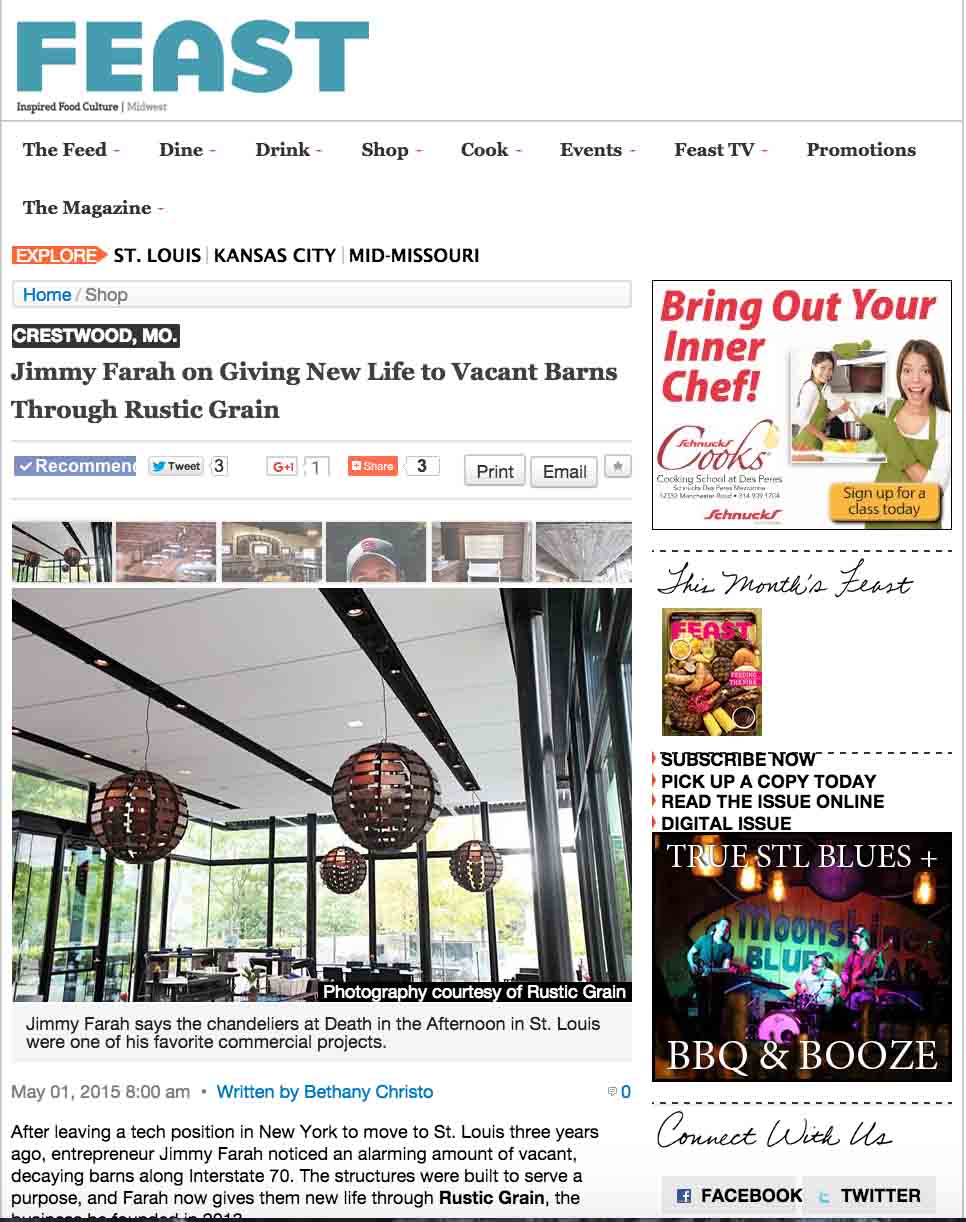 Check out the full article here:http://bit.ly/1iknfST

After leaving a tech position in New York to move to St. Louis three years ago, entrepreneur Jimmy Farah noticed an alarming amount of vacant, decaying barns along Interstate 70. The structures were built to serve a purpose, and Farah now gives them new life through Rustic Grain, the business he founded in 2013.

Since the launch, Farah and his team have deconstructed four large barns from the top down – including one in St. Clair, Missouri, and one in Edwardsville, Illinois – as well as three other structures to make one-of-a-kind residential and commercial tabletops, bars, accent pieces and more. Once pieces are finished, Rustic Grain tags each with the location and history of where the wood initially came from. Restaurant clients in the greater St. Louis area include Death in the Afternoon, Seedz Café, United Provisions and Juniper – including its new second floor event space – and the company is currently working on Brew Hub’s Chesterfield, Missouri, corporate headquarters.

Why did you launch Rustic Grain? Driving here on I-70 East, starting from around Columbus, Ohio, every 2 miles I’d [see] an abandoned structure. I grew up working with wood as a hobby on weekends with my dad back in Connecticut, building dining room tables as a fun thing to do together. It dropped off as I got older, but when we were passing by all these barns, the seed was planted. After spending a king’s ransom at Restoration Hardware with my wife for my [home] here – and 30,000 other people have those same pieces – I realized the potential of taking wood out of these barns, documenting the history and offering them to customers. It adds to the character of the piece; no one else will have something like it. We stick to a 90-mile radius around St. Louis, and the majority of barns we’re finding in the Midwest are made with pine and oak.

How has Rustic Grain grown? We started as a two-man operation, with me and our current vice president of production and design, Tim Nummela, [inside] a 900-square-foot retail front in a Kirkwood strip mall. We’ve now expanded to eight employees and a 15,000-square-foot modern warehouse. We have a lead on 75 barns in Missouri, Illinois, Arkansas and even upstate New York that people want to donate. Originally, a restaurant would take 12 to 16 weeks to complete; now we can do it in four to eight. We can do all the tabletops at once in one day, which would’ve taken us a week to do [before], and we can work on multiple restaurants or projects at a time.

What have been some of your favorite projects to work on? We’re 50:50 residential and commercial. Residentially, we took down one of the Cupples buildings and made a 14-foot table. We were given this 850-pound, 26-by-26-foot pylon beam from the basement, all pine, which the whole building rested on, and cut it into thirds. The third serves as a pedestal for the table, essentially, and this person is only one of three who can have it. The coolest thing we’ve done commercially would be the chandeliers at Death in the Afternoon. At night they cast these crazy shadows everywhere, which was just a coincidental by-product of the design. They set the restaurant apart, but I like it because it transitioned us from more simple products like tables and bars and catapulted us into fine-dining design – reclaimed wood is very hard to bend, so proving to ourselves that we could make it was a big step in our creativity and what we can offer.