This classic pre Civil War barn came to Rustic Grain off of a piece of land in Edwardsville, IL.  The barn was constructed in 1857 by the land’s owner, Mr. Pogue.  This property has the distinction of having the oldest written description of a parcel of land found in the local record books.  The entry was recorded in 1870 when the land was sold by Pogue to William Manion and his wife Margaret.  Though parts of it are illegible, here is how the description reads:

“Beginning at the center of section one in township four North Range Eight West, Thence North nine chains and seventy four links thence West Ten Chains and thirty two links thence north one chain and twenty five links to the south side of the hillsboro road thence north eastwardly along the south side of said road crossing the north and south lines half section one et a pourt 15 chains and seventy four links Horth of the centrie of said section One hence coutumany (containing?) along the south side of said roads to the West bank of Mooney branch thence up along said branch to the half section line running east from the center of section One aforesaid thence west eight chains and twenty five links to the place of begining containing 13 (unknown symbol) acres being the same lands conoujed by said Mannion and wife to said Pogue” 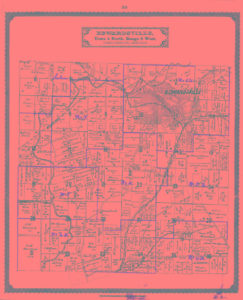 In 1894 William Manion sold the land to a Mary Grainey. Then in 1902 another adjacent parcel was essentially given to Mary Grainey (cost of a dollar) by Margaret Manion widow of William Manion.  Between 1907 and 1909 ( perhaps bought in 1907on credit and paid off in 1909) Mary A. Grainey, and husband sold the land to a Conrad Hueter and Wife.  Sometime between 1926 and 1963 the land again transferred hands this time from Conrad Heuter to Mary and Russ Southard.  It is possible that Mary was Conradʼs Daughter and that she inherited it.

Sometime in the late 70s or the early 80s the land where the barn rested was sold to Dre Kalish.